I'm sorry it's late! There's a lot to talk about in this devlog, so it'll be longer than the previous ones. I appreciate those who read through the entire thing, but I will be making different sections in case you want to skip to a certain part!

This is supposed to be a 10k celebration, but the demo has actually hit over 12k as I'm writing this! I still cannot believe how consistent and amazing the support has been for this demo. I really do appreciate it from the bottom of my heart. Every comment and message I get saying how much they enjoy the game means the world to me. When making this game, I had no idea that this amount of people would ever play it. So thank you to everyone who has played! And a special thank you to everyone who has reached out to compliment my game, created amazing art and writing about Devyn, and generously donated money to help support me. I'm going to try to make the final game as fun as possible for you all :D

I couldn't be doing this without you!

"When will the full game come out?"

I originally wanted the full game to come out by the end of this year, but it's looking like the scale of the game is too large, and I unfortunately cannot work on it full-time currently. So I am now setting my goal to have to full game completed by the end of next year.

I am planning to update the demo scene by scene until a certain point. So you will not have to wait until next year to see new content! I will have a more clear release date when things are further along in the process. I do appreciate everyone's patience so far!! I want to make the wait worth it.

"Are you guys going to make an android version?"

I would gladly look into making an android version! I know it is an option, but I'm not super familiar with the process and what is needed. Depending on the time, I may wait until the full game is complete to make other builds. But I will definitely try my best to make it work. Also another thing about this question I want to talk about, there is really only one person working on the game currently. I do all the writing, art, and programming so far. I'm not sure if everyone knows that, so just a fun fact!

"How long does it typically take for you to write out the scenes?"

It really depends! I can usually write around 1000 words in a day if I really focus, but I often get distracted by other work. And since pretty much all of the scenes will have over 5000 words, it will take me a week at the very minimum to just write down most of it.

This does not include editing and brainstorming which can really double or triple the amount of time. It took me over a week to write out the first scene for the demo. I'm not a very experienced writer, so I often have to do a bit more work to get it sounding right. I'm still planning on adding more to that first scene even though I polished it up in March.

"What part of the process takes the longest? The art, the programming, etc..? Which part is the hardest?"

The longest part is definitely the writing. The game dialogue is so extensive with more and more choices in each scene that it takes way longer than any other part. I also do most of my formatting during the writing stage so the programming doesn't take as long.

The hardest part is probably programming in the music files. I'm still not happy with how the music is set up in the demo, but it was driving me a bit nuts working on it. It's not that complicated a task, but I really don't enjoy doing it for some reason.

"Wonder if this is alright but what made you decide to do a yandere visual novel?"

There are a couple of reasons! I've been a fan of yandere characters for a long time. They were always my favorite in anime and comics, and I never really knew why. Once I started playing visual novels, it made me realize how much I enjoyed the trope! Yoosung from Mystic Messenger and Toma from Amnesia: Memories really solidified my interest.

When I started writing my own stories for VNs and comics, at least one of the characters was a yandere every time! I really enjoyed writing it more than other types of characters. I really like the mix of horror and romance where everything has multiple meanings.

And then my friend told me about the yandere jam! It was a game jam that took place in February of this year and the main requirement was to make a story with a yandere character. I joined as soon as it started and decided to make Invite Me In as my first solo game! Though I has originally meant for the game to be much shorter so I could finish the whole thing in time, I only ended up making a demo.

That's all the questions! I hope this gives a bit more insight into the inner process of the game.

To celebrate hitting 10k, I've decided to create a DTIYS! But it's more of a "create this in your style". As long as it's based on the artwork below, you can make anything you want! This includes art, writing, sculpture, music, collage, photography, cosplay, etc.

Please read the rules if you are interested in the prize!

The prize is an illustration made by me. The drawing will be of your chosen MC character with Devyn! There will only be one winner, so best of luck :D

I will announce the winner on September 20th on my Twitter, Instagram, and DeviantArt. If you are reading this devlog after the submission date, you can still do the DTIYS! You just won't be eligible for the prize.

Also, if you join the discord server and send your entry into the fan log channel, you will get a special role to celebrate the event :D 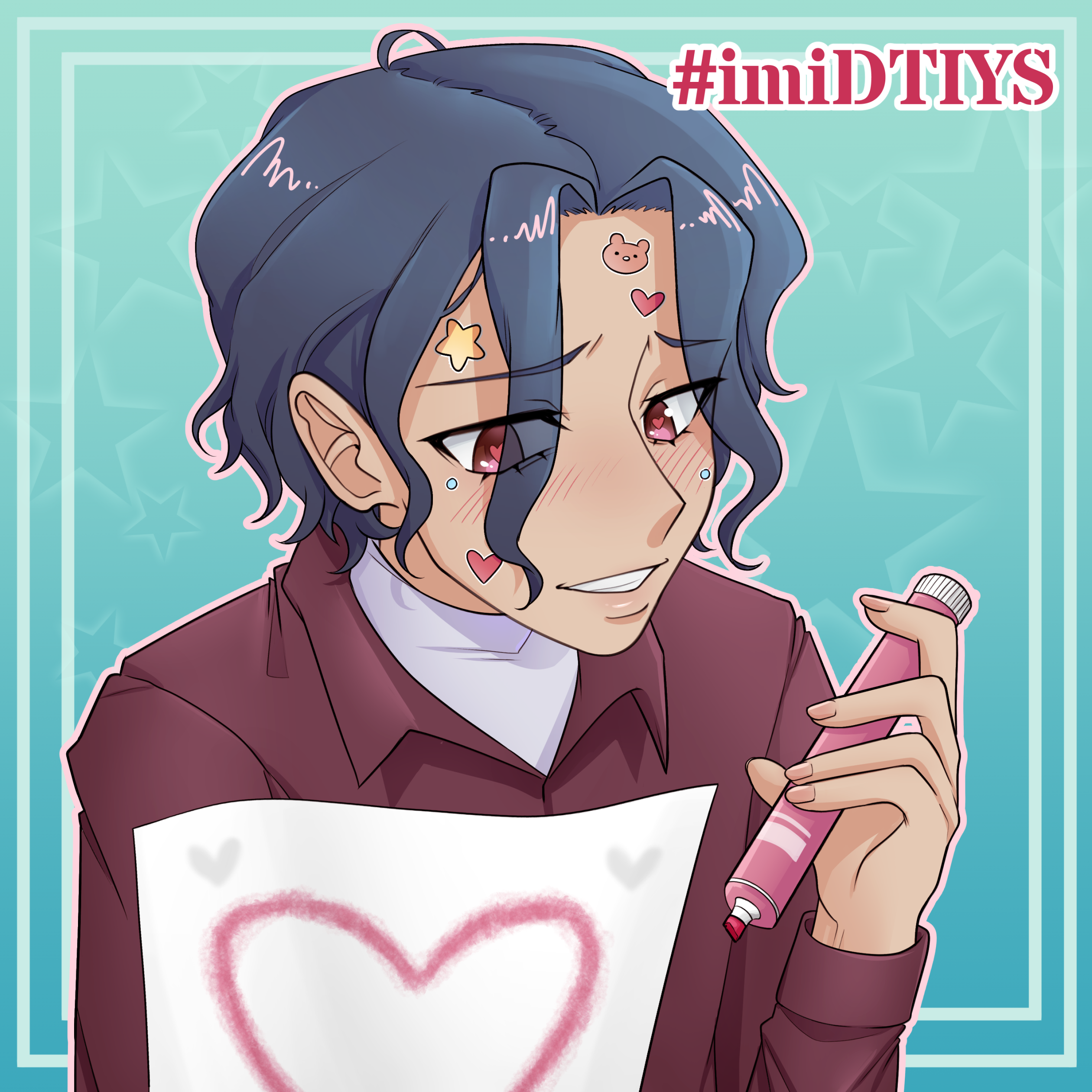 In the last devlog, I said I would make a list of things being worked on for the progress. So here is that list! I will add this list to every devlog from now. Though the percentages are just estimated for what is left to make an updated demo.

Get Invite Me In [DEMO]

Invite Me In [DEMO]

It's so exciting to see activity on this adorable demo! Devyn really burrowed his way into my heart with our brief, unsettling meeting so this is exciting!

Now, I've never done a DTIYS so I wanted to ask for a point of clarification...? Are we meant to recreate the image with the only alteration being that it's in whatever style we chose? Or can we take a few liberties? Like... change where the marker is? What pose he's in?

I'm happy to hear you liked the demo!

And yes, please feel free to take creative liberties with the art! As long as you can tell it's inspired by the illustration in some way, you can come up with whatever you want.  It doesn't have to be the same pose, and you can build off the ideas however you please. It's a very open-ended challenge!

I hope this answers your questions :)

It did! Very much so! May have to restart the one I started... :D

Aww, Devyn looks so cute! Congrats on 12k and best of luck to those entering the contest! :D

Nice! It's great to see how the development is going and the little things you've been doing, it's a cool little insider look~! Take your time tho! Health is very important, especially if you've said that it'll be a long project in the making. Goodluck in developing the game and also your life in general, stay safe and take care!!!

Yay! Like I said before, you need worry not, you are the one making this game for us, so we'll support you all the way through the best we can. cant wait to do DTIYS btw, good luck to everyone who participates. Keep up the fantastic work!

it was very cool to read your progress and thoughts on the game! good luck to you and everyone who’ll be participating in the DTIYS!!!

Take your time we believe in you!!